Note: This is the English translation from an article that appeared in the December 2021 issue of the Baja off-road magazine, Caminos de Leyenda (Translation: Paths of Legend). 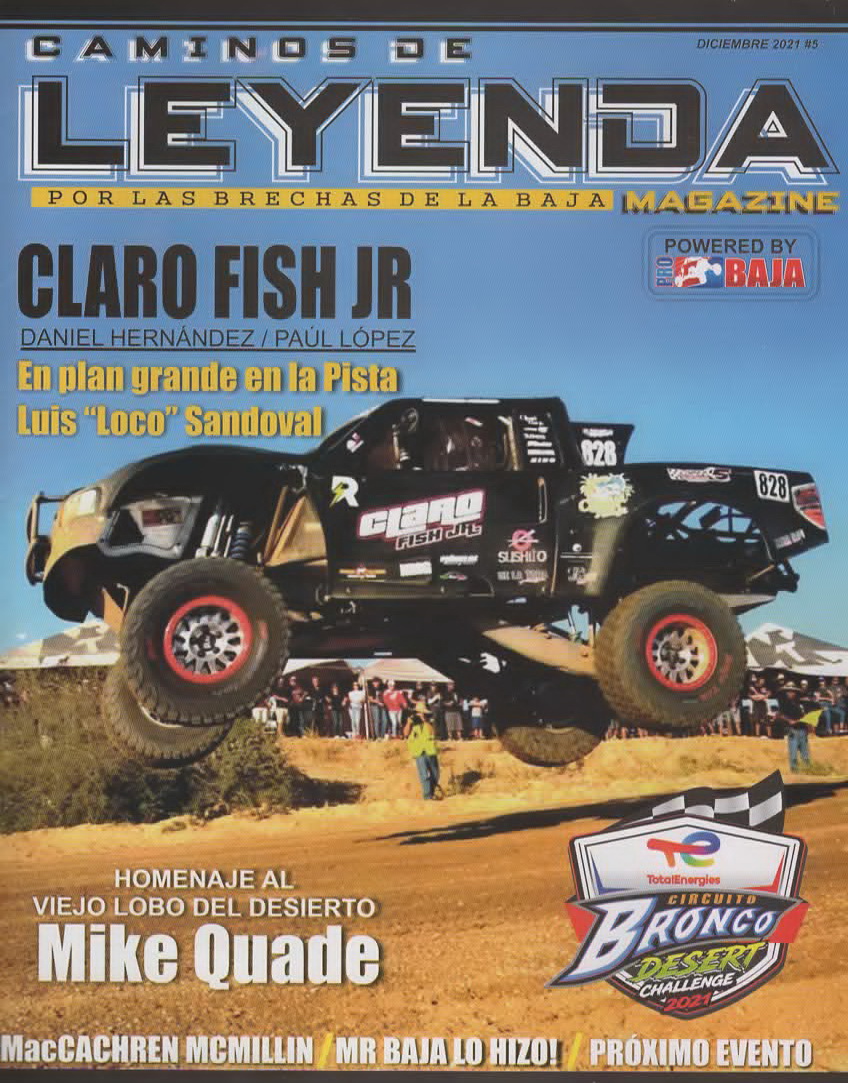 When we talk about living legends of the Baja Sur Mexico off-road, we can think of multiple characters, but not only the natives of BCS have reached the title of off-road legends, there are a significant number of drivers who have adopted this land as their own, and who already are considered as part of the “Choyero Off-Road” inventory; without a doubt, one of them is Mike Quade.

Born on February 10, 1946 in Escondido, California, "Mickey's" career began in 1965 at the age of 19, in what would ultimately be a long and prosperous career in motorsports. As a rookie, in 1965 he began participating in the Motocross races that, from 1959 on, began to become popular in California, with a Butalco motorcycle (a Spanish motorcycle brand that remained on the market from 1958 to 1983), with which he began to stand out and to win his first competitions.

His passion for motorcycling turned into a profession, realizing that his talent began to pay off handsomely, Quade took up racing as a job as well as a sport, and motorcycling became a lifestyle that he loved, spending several years on it… Desert racing was beginning to become “in vogue” in the southwestern United States, something that immediately caught his attention…

Along with the motocross races, in California and with the profits he was getting from his winnings, in 1969 he bought his first Husqvarna, with which he began to compete in the California desert aside to his friend Kim Clifford, "In that time the desert races began to transcend; if you showed up to race, they paid you something, and if you won, they paid you more, and since I almost always won… that was how I got money,” says the 75-year-old veteran. At this point in his life, Mickey was racing up to 5 times a week!

At that time, he also ran in the Californian serial of the "Speedway Bikes", races in which the bikes only turn left and do not have a brake, in these track competitions, he ran up to 4 times a week between the towns in Costa Mesa, Orange County, San Clemente, San Bernardino, Victoria and Sacramento, California, as well as in Reno, Nevada... Those races were on weekday nights, and if that wasn't enough, on Sundays he used to race in the desert races on his Husqvarna… "Racing was my job, it was my life," he says.

In 1969, his friend Kim Clifford invited him to participate in some races that were held on the Baja peninsula, his first participation would be in the Baja 500, and later that same year, in the 3rd edition of the Baja 1000 (1969) finishing in La Paz, a race that, regardless of the result, marked a before and after in the life of the Californian rider, because seeing the splendor of that small port, he fell in love and promised himself: "one day I'll move to live in La Paz…”

From 1973 to 1975 he won the “Open Pro Ferres” plaque for open motorcycling in the desert, and at that time the Escondido-born rider was running an average of 50 races a year, that is, he only rested 4 weeks on average a year! At that time Quade was so prominent that they took him to race internationally because in those years the European Motocross Championship was already a success, and he was invited and sponsored by Husqvarna to race in some of those international events, with it, now residing in San José del Cabo, Baja California Sur, Mexico, he saw action either in the desert or track races in Mexico, Switzerland, the Netherlands, Yugoslavia, Bolivia, the Czech Republic, Poland, Spain, and Canada, among other countries.

Thus, dividing between the track and desert competitions, always with good participation, in 1973 he won the motorcycling overall in the Baja 500 together with Howard Utsey, repeating in 1974 and 75, although his name does not appear in the records of those years, because the "driver of record" was someone else. That same year (74) he achieved first place in the 125cc category at the Parker 400, organized by SCORE International, repeating his victory in 75.

The award-winning off-road legend remembers when he went to the motorcycling races that took place in Rosarito, Baja California, in the competition called "Rosarito Grand Prix", in front of the beach, where participation reached 300 competitors, in the last one of those events in which he participated was the “Ensenada Grand Prix”, “…I beat them all”, he points out proudly.

The turning point after the accident

1975 was a bittersweet year, as he obtained important results, but at the end of the year, he had a serious accident in which he broke his femur in 27 parts! He was in a wheelchair for a full year and two more on crutches. … But the champion didn't waste that time without racing, as he managed to get hired as a Husqvarna Moto Cross teacher, giving lessons in Europe, Canada, and at the USA Training Center.

After that accident, he decided to stop participating in motorcycling, and in 1977 he bought his first Off-Road vehicle, a Class 9, with which he won 2nd place overall in the 1978 Mint 400 despite still needing crutches to walk. On the dirt roads of California, Nevada, Arizona, and Baja, he rubbed shoulders as a friend with legends such as Roger Mears and Mickey Thompson.

Among the stories and tales that this old coyote of the desert tells us, three stand out. One, in which Mike arrived for his first mechanical inspection on a Mint 400, in his Class 9, and upon arrival they began to ask him about the type of suspension that his car had, as well as technical matters, and the then-rookie in automobile racing had no idea what the event official was talking about… well, without understanding the characteristics of his own car at all, he raced his first Mint 400. In the second story, he briefly recounted the 1972 Baja 1000, in which he broke his left foot early in the race, but didn't give up trying to reach the checkered flag and ran more than 500 miles on his broken left foot… Another of the stories that this character confessed to us, was in another Mint 400 in which he rented a vehicle to pre-run, and on the first lap of the race, in a dirt silk bed he punctured all four tires at the same time… After a lot of work to get out of the silt bed, Quade managed to get a ride to where his rental Suburban was, arrived, took the four tires and got back to put them on the race car, returning later to put the four tires back on the rental vehicle. “One of those days", he said laughing...

He fulfilled his dream: Mikey moves to La Paz, Baja

In 1985, Mikey fulfilled his dream of moving to La Paz. Upon his arrival, with 20 years of experience in off-road competitions, he immediately found a place with the then protagonists of the Calisureño off-road, establishing long and endearing friendships with characters such as Octavio "Don Viejito” Dávalos, Marco Antonio López “El Güero” Cinco, Rafael “Rafa” Haro Pulido, Ignacio “Ratón” Carballo and Humberto Ramírez “Piteco”, among many others. His incorporation into the Baja Cactus Club, the first organized off-road club in BCS, was an almost obvious fact of happening, and for the next decade, he became heavily involved in the Baja Sur off-road racing scene.

He also won 3rd place in Class 12 at a Baja 1000, but his participation in BCS for nearly 15 years in Class 1 marked an era. His cunningness, his experience, his excellent handling, and brave character made him an obvious protagonist in the Baja Sur Off-Road... Who does not remember those battles of Mike Quade against Valerio González and Ron Bellerive aboard the "Black Widow" in the Luis "Loco" Sandoval track in San Jose del Cabo? Vehicles that at that time were way more powerful than his, but "Mickey" Quade knew how to drive his car to the fullest and managed to close all the spaces to stay in the lead, giving the fans tons of bright emotions as the veteran was the star, winning multiple competitions and becoming one of the rivals to beat with a ton of victories, three Class 1 championships in Baja Sur and one Mexico’s Off-Road National Off-Road Championship, in 2000.

In some of his last races in Class 1, between 2004 and 2005, Mickey had a great performance with the following results:

Without a doubt, a success story is that of Mike 'Mickey' Quade, an old desert coyote on the dirt roads, tracks, and trails of the world, who took the Baja peninsula as his home and whom we greatly respect and admire, paying this little tribute in life to his achievements and spectacular trajectory. 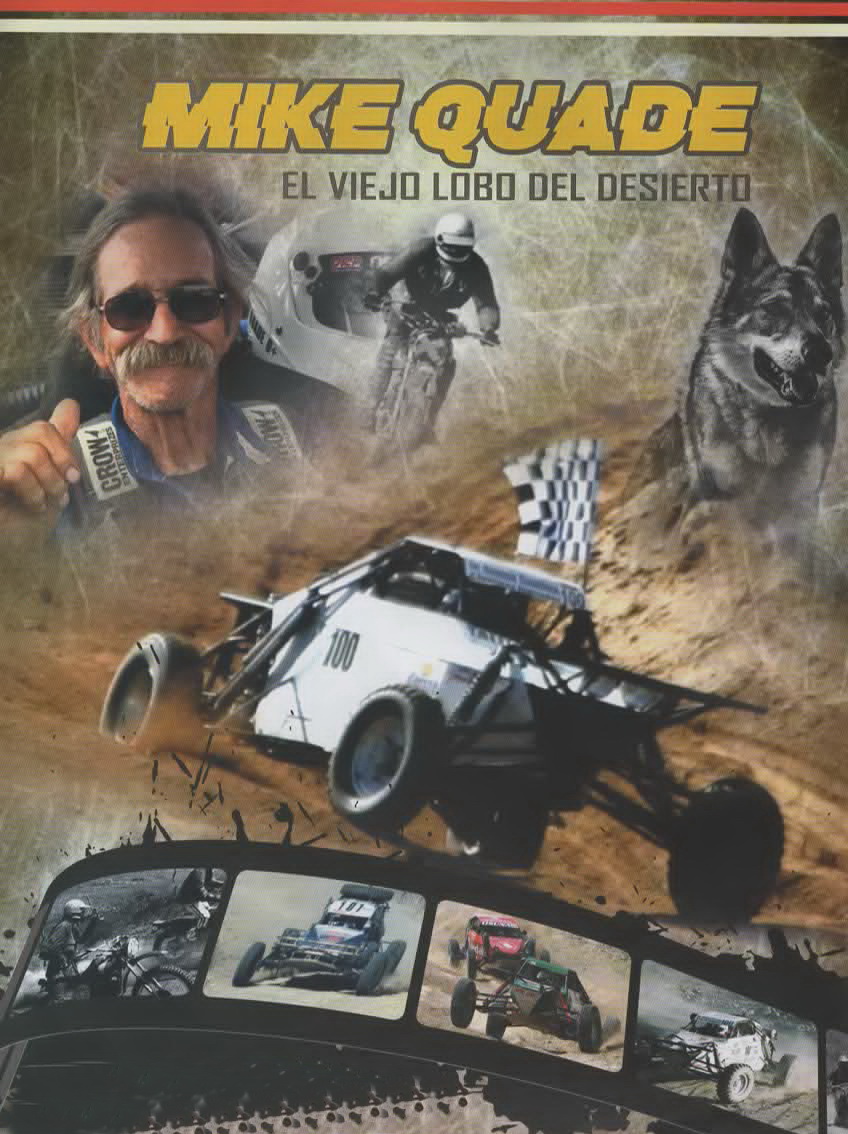