Nelson Almeida pioneered organized off-road activities in Brazil starting in 1974. He purchased a World War II-era Jeep from an Army surplus yard and spent two years restoring it.  Along the way, he became friends with other Jeep and 4x4 owners in Brazil, which led to the founding of the first off-road club in Brazil, the Brazil Jeep Club. 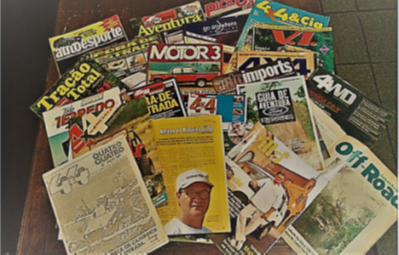 Above: Articles by Nelson Almeida were featured in many off-road publications.

1984 - Founded "Via Terra", the first company in Brazil focusing on organizing 4x4 events.

1986-1989 - With his company Via Terra, Nelson helped organize many important off-road events in Brazil, including the International Camel Trophy and 50-year festivities for Land Rover Brazil.

1992 - Developed and edited a special 4x4 section in AutoSport Brazilian magazine. As a journalist and special consultant, Nelson wrote articles for magazines in Brazil, Japan, Australia, and the United States.

1996 - Published "Todo Off Roader e um Amigo", which translates to "Every Off-Roader is a Friend", with basic ethics and principles for groups and off-road clubs on how to behave in social, environmental, and competitive situations.

ORMHOF congratulates Nelson Almeida on nearly 50 years of dedication to off-roading in Brazil.