The "Happiest Race on Earth" just got a little happier. 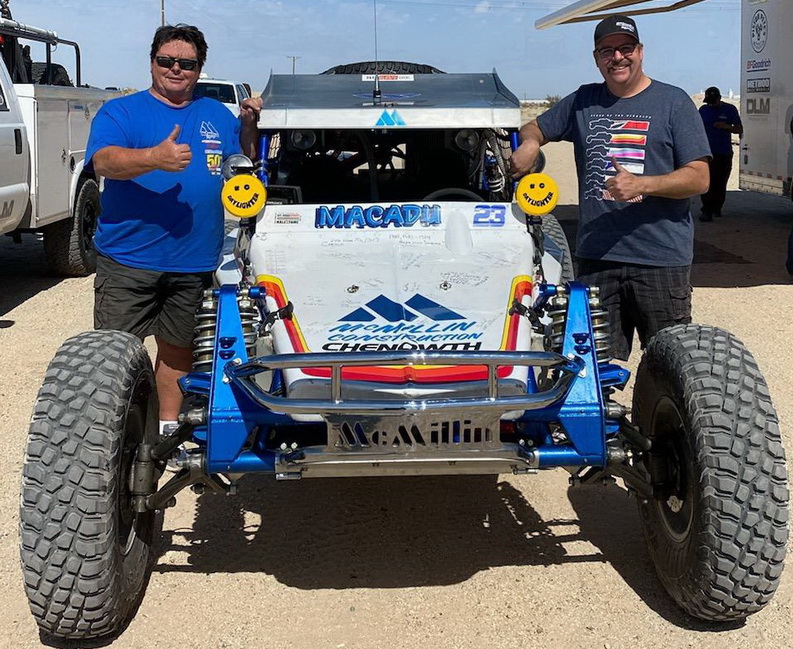 Mark McMillin, left, and Rory Ward, are teaming up to race the 2021 NORRA Mexican 1000 in McMillin's famed Chenowth, 'Macadu'

"Mark and Rory are two of the nicest -- and funniest -- guys in off-road," said ORMHOF's Barbara Rainey. "We are really looking forward to having these two successful off-road industry icons in the car together for the first time ever to honor NORRA and the Off-Road Motorsports Hall of Fame."

As part of one of the most storied and successful teams in off-road racing history, Mark's passion for supporting the industry, for victory, and for setting the highest bar possible -- while still making sure he and all around him are having the time of their lives doing it -- is a Hall of Fame worthy achievement. 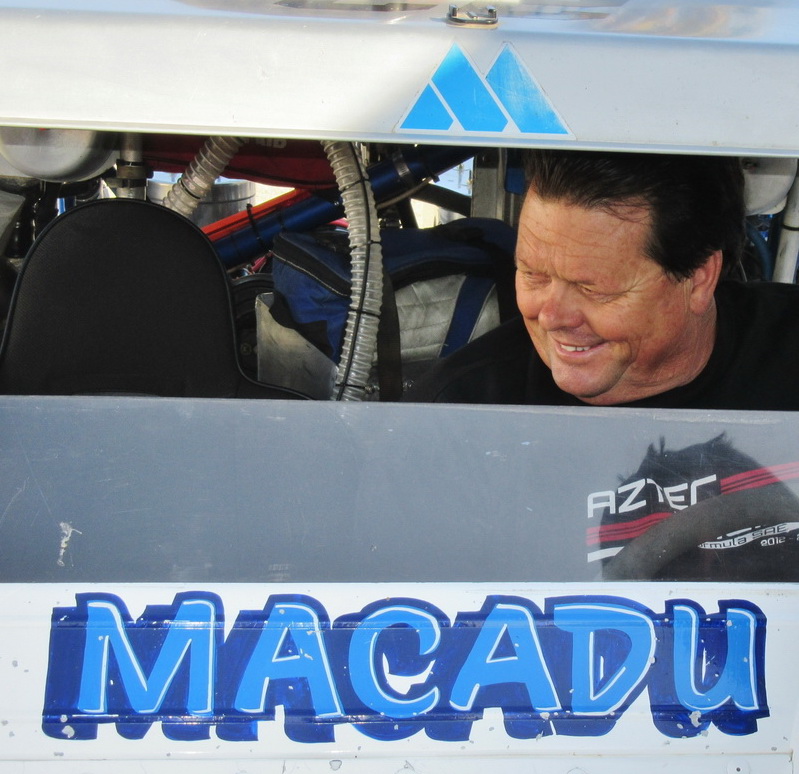 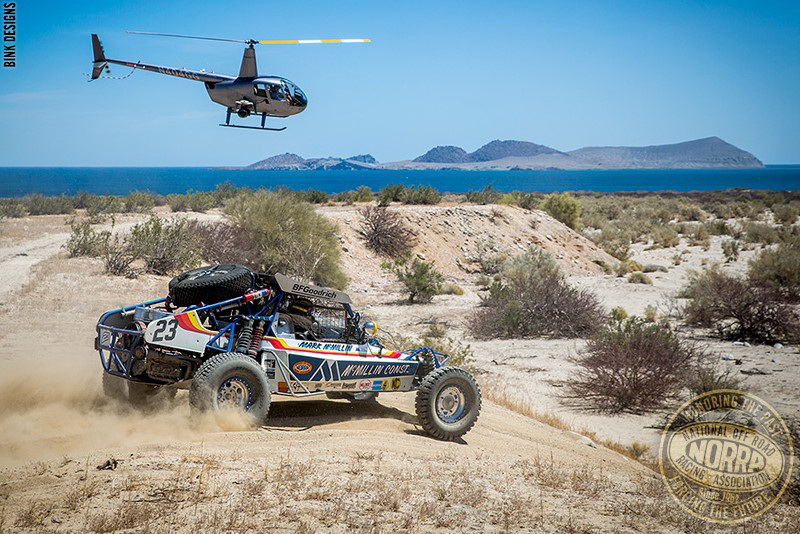 For the inaugural NORRA Mexican 1000 in 2010, Mark brought his famed 'Macadu' Chenowth-Porsche out of retirement, a commitment that helped influence a great number of other racers to join the vintage off-road movement and create what today is known as "The Happiest Race on Earth". 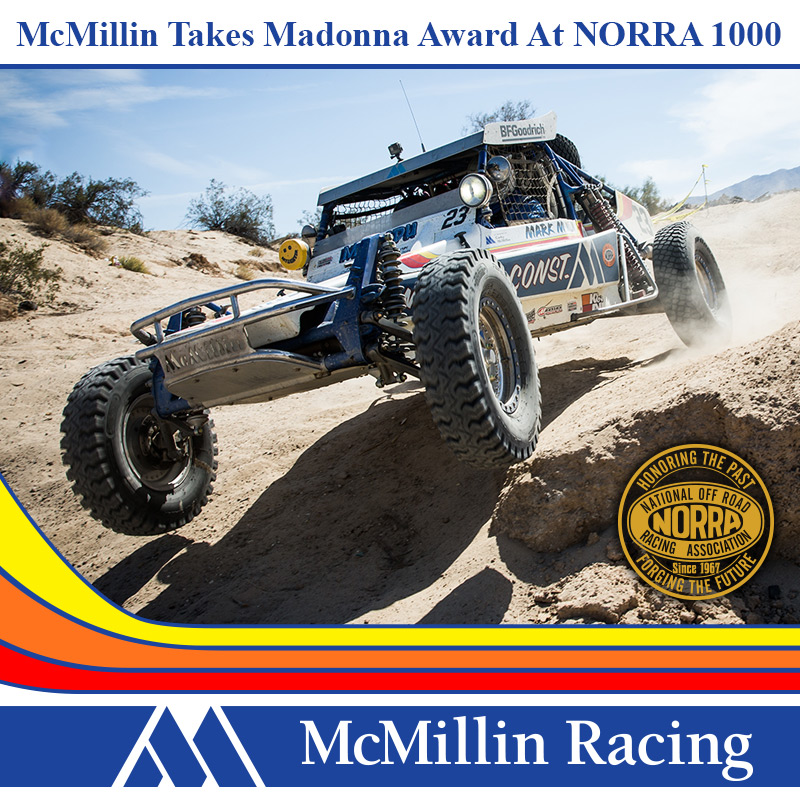 At the 2017 NORRA Mexican 1000, Mark received his third prestigious BILSTEIN Madonna Award. The Madonna is given to "an individual who wins a championship in a major American racing series, displays sportsmanship and positive character traits on and off the track, and possesses an intense desire to win while overcoming adversities."

A professional firefighter by trade, Rory is also a talented artist. A vintage off-road vehicle historian and restoration expert, Rory's attention to detail and historical accuracy has earned him high praise among members of the off-road community. In his role as a board member for the Off-Road Motorsports Hall of Fame, Rory is responsible for the Hall of Fame's vehicle collection, caring for such notable off-road vehicles as the BFG Blazer, Scoop Vessels Class 8 Truck, and Snortin' Nortins Nova.

Rory honed his artist skills in 7th and 8th grade Algebra class. He was 18 years old when he attended the 1988 SCORE Off-Road Show in California. His love of off-road racing shined through in his drawings, and one of his drawings was that of Ivan 'Ironman' Stewart. While at the show, Rory asked "Mr. Stewart" if he would sign his artwork. After looking at the artwork for a couple of minutes and showing it to his friends, Ivan signed the artwork and then asked Rory if he would be interested in drawing a t-shirt design for his Toyota race truck. And as they say, the rest is history. Today, Rory's Racers Only Motorsport Designs has designed artwork for events and race teams from Baja to Indy, Dakar to Daytona.

Rory likes to say that between them, he and Mark McMillin have five overall Baja 1000 titles.  All kidding aside, Rory is a successful racer in his own right. A three-time NORRA class champion, Rory teamed up with UPR's Jeff Furrier in Mark Stahl's Chenowth for the win in 2011, and with Ed Maurin in the Larry Ragland Woodstuff car for back-to-back titles in 2016 and 2017, including the overall win for Challenger Era vehicles.

Rory has restored several iconic off-road vehicles, including the famed Mickey Thompson Challenger IV. The project currently taking up Rory's garage space is the 1984 Toyota Ivan Stewart truck chassis #001 built by PPI, the famed race team company of ORMHOF Class of 2020 inductee Cal Wells. Rory hunted the chassis down, finally locating it buried under a pile of debris in Baja. Five years in, Rory is still passionate about completing the historically accurate restoration of the #001 Toyota.

The NORRA Mexican 1000 pays tribute to the early days of off-road racing and NORRA co-founders Ed Pearlman and Don Francisco. In 1966, Pearlman, Francisco, and a group of other California-based off-road enthusiasts founded the National Off-Road Racing Association (NORRA). The inaugural Mexican 1000 was held on the Baja Peninsula in 1967, beginning in Tijuana and racing from Ensenada to La Paz. Utilizing his skills as a pilot, Francisco charted a viable racecourse and calculated needed service stop locations. Using his personal aircraft, specially modified to fly on lower octane pump gas, Francisco was very active during the early events, transporting VIPs and press up and down the racecourse. He also helped Ed Pearlman establish the first set of rules and classes for the sport of off-road racing.

Utilizing his skills as a pilot, Francisco charted a viable racecourse and calculated needed service stop locations. Using his personal aircraft, specially modified to fly on lower octane pump gas, Francisco was very active during the early events, transporting VIPs and press up and down the racecourse. He also helped Ed Pearlman establish the first set of rules and classes for the sport of off-road racing.  A Meyers Manx buggy designed by Bruce Meyers and driven by Vic Wilson and Ted Mangels won the inaugural Mexican 1000 Rally, besting a field of 68 competitors.

The Mexican 1000 grew into the Baja 1000 that continues today under the leadership of SCORE International.  Mike Pearlman, son of NORRA co-founder Ed Pearlman, resurrected the Mexican 1000 Rally concept in 2010 to celebrate the vintage vehicle classes of off-road racing and provide a fun rally-style atmosphere for competitors, teams, and fans at the "Happiest Race on Earth".

ORMHOF was founded by NORRA's Ed Pearlman. Legendary off-road racer Rod Hall was the next chairman and led the Hall of Fame for many years, before handing the reins over to current chairman Mark McMillin. The mission of the Off-Road Motorsports Hall of Fame is to educate and inspire present and future generations of the off-road community by celebrating the achievements of the innovators, explorers, advocates, and champions that came before.

There are currently 106 members of the Off-Road Motorsports Hall of Fame.  Each year a group of industry professionals from all areas of off-road selects the incoming class of inductees from the nominations that have been received. Anyone who has been involved in the sport of off-road for at least fifteen years and has made a significant impact on the sport or industry is eligible to be nominated.  Nominations are accepted online during the month of April.

Other Hall of Fame programs and projects include documenting the history of off-road by gathering and preserving print, images, and video, and making them available online for all to enjoy.  ORMHOF also maintains a collection of vintage off-road vehicles.

The Off-Road Motorsports Hall of Fame is funded entirely through the generosity of members, partners, and donors in the off-road community.

Visit the Hall of Fame website to learn more about the nomination process and explore the digital collections. Legends live at ormhof.org.