The Original Dusty Times Collection at the Hall of Fame is Growing!

Six additional years of the original Dusty Times magazine, covering off-road during the years 1995-2000, have been digitized and uploaded to the Dusty Times Collection at the Hall of Fame.

Here's just one great find: The cover of the September 1996 issue (above) features Robby Gordon in his Valvoline Ford with a patriotic paint job for the SCORE Fireworks 250, and Bob Gordon and Frank 'Butch' Arciero Jr in their Toyota-powered Chenowth buggy, Betsy.  Robby won his 'fourth on the fourth' of the season in the morning truck race, but it was his dad Bob, and Butch, who not only won first in class but first overall.  All three -- Robby, Bob, and Butch -- are now Hall of Fame inductees.

This most recent upload of Dusty Times represents an additional 84 issues, more than 4,620 pages, of off-road history available for all to enjoy. Every issue from 1984 to 2000 is now available online, plus the inaugural preview issue from 1983, bringing the total number of issues that have been scanned and uploaded to 205, more than 12,000 pages.  Off-road racer and enthusiast Mike McCluskey agreed to take on the Hall of Fame Dusty Times project to help preserve the history of the sport.

"Scanning over 12,000 pages of newsprint is a time-consuming and tedious process. ORMHOF is grateful to Mike McCluskey of DMC Document & Microfilm Conversion for taking on this monumental project." -- Mark McMillin, ORMHOF chairman

The issues from 2001 will be added to the collection within the next few days, and then Mike will be tearing down his machine for a much-needed cleaning.  "Newsprint is hard on the equipment," he explains.

Once his equipment is back up and running, Mike will tackle the remaining issues of Dusty Times, from 2002 through 2012, and the final nine issues from 2013.  Dusty Times went digital in October 2013. When complete, the Dusty Times Collection at the Hall of Fame will include a digital copy of every page of every issue ever published, 358 issues in all, nearly 20,000 pages. 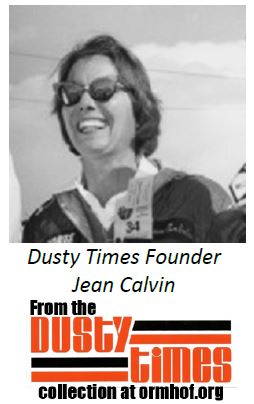 It was forty years ago, in 1983, when Jean Calvin decided to put her journalistic talents to work in the off-road field, in which she had been immersed for many years. Jean was an ice skater with Sonja Heine, had a degree in English History, and was always a competitive person, racing sports cars and then turning to off-road for some real challenges. Off-road racing was very different 40 years ago. Cars had three to four inches of travel and it was certainly an adventure to take off into the desert for a 400-mile run, and with the equipment available you were out there racing for a long time, even if nothing went wrong.

Jean founded Dusty Times to give the off-road races and rallies the attention they deserved. Dusty Times was published monthly, often featuring photos from Jim Ober and his Trackside Photo photographers as well as articles by Judy Smith, who managed to appear at virtually every finish line to interview racers, jotting down notes in her trusty spiral notebook. 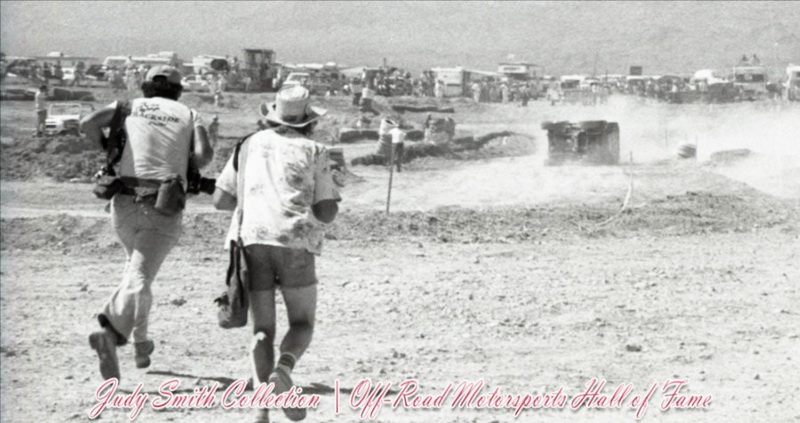 Jim Ober of Trackside Photo, above left, sprints to the scene of a rollover at a 1978 SCORE Race in Las Vegas. From the Judy Smith Collection at the Off-Road Motorsports Hall of Fame 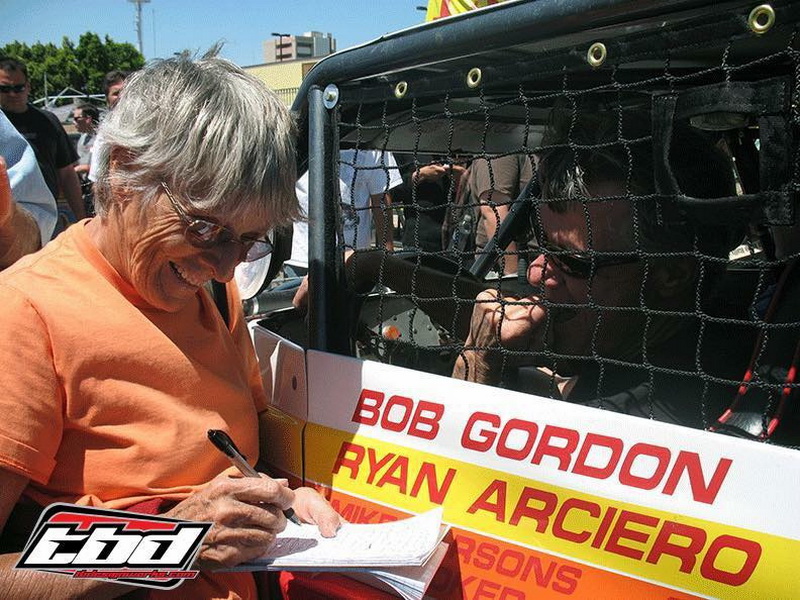 Judy's favorite column to write for Dusty Times was called "The Losers" because she felt the stories of racers who had problems were the most interesting.  In addition to the Dusty Times collection, ORMHOF has also acquired Judy Smith's extensive archives which we look forward to sharing. Jean, Judy, and Jim have all been inducted into the Off-Road Motorsports Hall of Fame.

A peek into the past:  A few of the file folders in one of Judy Smith's file cabinets. Note the "Losers" -- Judy wrote a column called "The Losers" that appeared in Dusty Times for many years.

Jean passed away in 1997 after a long and varied career in the off-road world. Her husband, John, picked up the reins of Dusty Times and continued as editor until his passing in 2013.  Rod Hall was contacted by John's family to see if he was interested in preserving the Dusty Times' history, and he made a road trip to pick up multiple file cabinets and boxes containing the Dusty Times archives.  The archives contained stacks and stacks of the Dusty Times magazine. 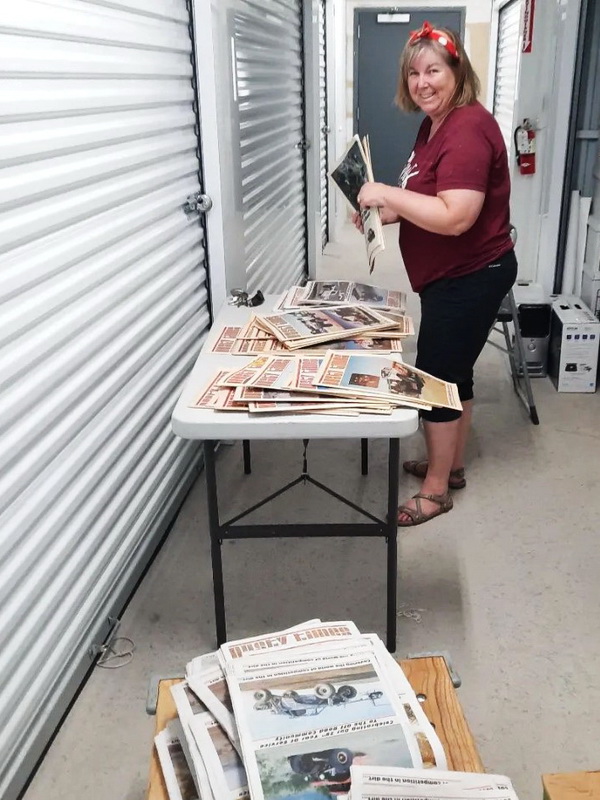 Shelley Krehbiel sorting through the Dusty Times archives in the Hall of Fame's climate-controlled storage.  Storage that is climate controlled is more expensive but is critical to slow the degradation of print and photographic materials.

Shelley Krehbiel from 4 Low Magazine volunteered to help ORMHOF sort through the archives in preparation for digitizing, finding every issue ever printed, except one. 357 out of 358 issues. June of 1989 was missing!  A call went out on social media, and almost immediately, Mark Murrell of Fire Guys Racing contacted ORMHOF with the missing issue, which is now part of the collection. 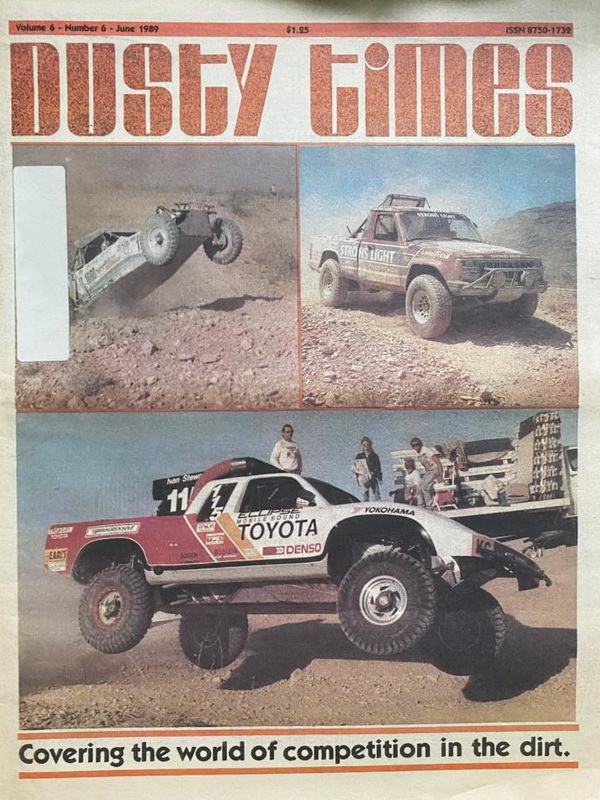 The missing issue from June 1989 is no longer missing, thanks to Mark Murrell and Fire Guys Racing.

Please enjoy the Dusty Times Collection at the Hall of Fame.  The issues have been scanned for OCR which makes each issue searchable. Issues can be easily shared on social media.

ORMHOF would like to thank Webmaster Suzy Johnson for her work in organizing the collection online.

The Dusty Times Collection at the Hall of Fame is made possible by our members, partners, and donors.  We invite and welcome your support!  Join, partner, or donate here.