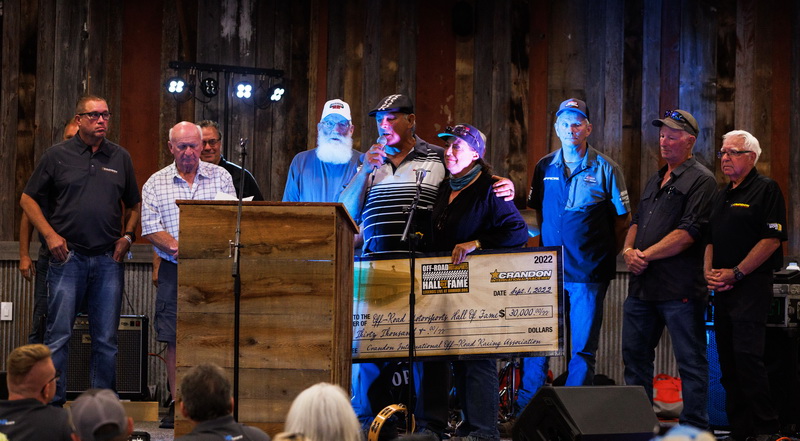 September 2022 - Crandon International Raceway has announced plans to build a Short Course Annex of the Off-Road Motorsports Hall of Fame inside the historic Lucas Oil Barn at the midwest facility.  The announcement came at the Crandon Gold Ticket VIP event to kick off the 2022 Polaris Crandon World Championship and Red Bull Crandon World Cup weekend and included a check presentation by Crandopresident Cliff Flannery to ORMHOF's Barbara Rainey to solidify the historic agreement.  ORMHOF was also the beneficiary of proceeds from the 2nd Annual Lucas Oil Crandon Legends Poker Run, which the Flannery family matched with an additional donation.

"It isn't what you can take with you, it's what you leave behind. We've been around so long dirt isn't even that old. We just want to leave something behind." -- Cliff Flannery 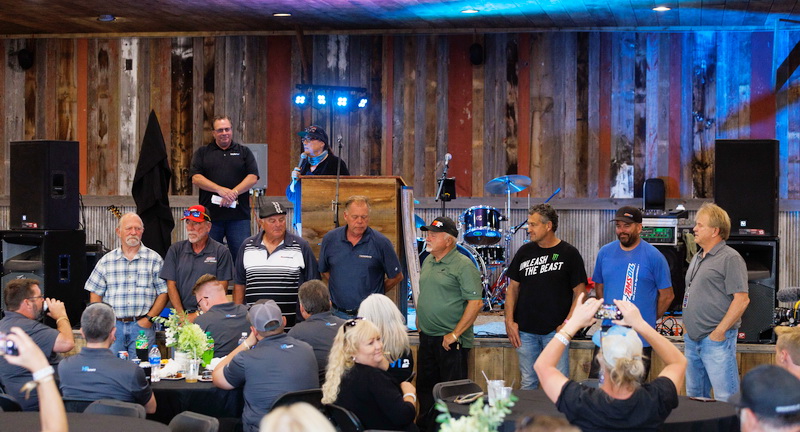 Many Off-Road Motorsports Hall of Fame inductees were in attendance for the announcement, including (pictured standing left to right) Bill Savage and Frank DeAngelo from Championship Off-Road, Crandon Raceway president Cliff Flannery and Crandon promoter Marty Fiolka, short course legend Curt LeDuc, rock sports inductee Shannon Campbell, and ORMHOF Class of 2022 short course inductees Brad Lovell and Scott Taylor, who will be formally inducted into the Hall of Fame at the ORMHOF 2022 Induction & Awards Gala presented by 4 Wheel Parts on Sunday, October 30 at the South Point in Las Vegas.  Not pictured, but also in attendance was ORMHOF inductee Cameron Steele who said, "the Off-Road Motorsports Hall of Fame has teamed with Crandon International Raceway to give the short course drivers a home...to come to Crandon makes you want to come back over and over again." 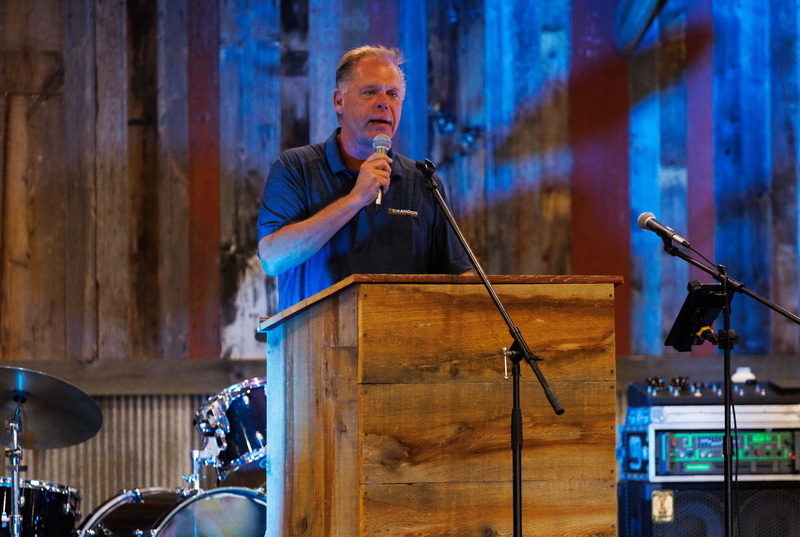 ORMHOF inductee and Crandon promoter Marty Fiolka revealed that the new ORMHOF annex at Crandon International Raceway will see a revitalization of the upstairs area of the Lucas Oil Barn, a structure that once served the dairy farm on which it stood when the original Crandon International Off-Road Racing Association purchased the property in 1984. While not finalized, current plans call for the museum space to house vintage short-course racing vehicles, driver and event memorabilia, interactive displays and videos, a Crandon Wall of Fame to honor local volunteers and Midwest Sportsman drivers, as well as a new Crandon “Walk of Fame” for race winners walking from the track to the podium area. The remodeled building will also house a new Crandon Media Center. 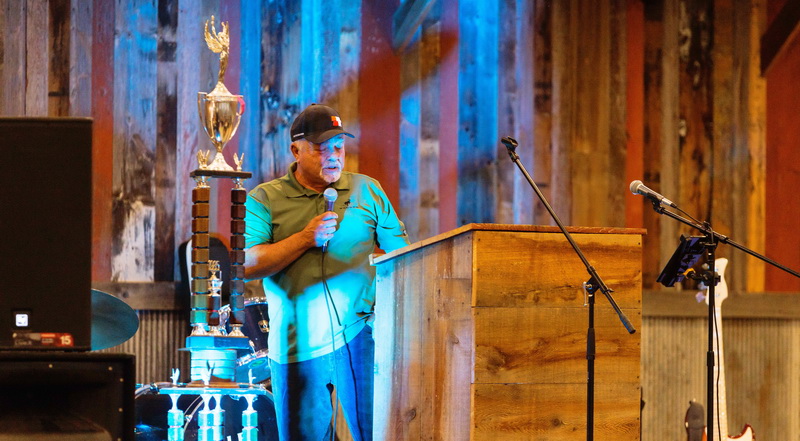 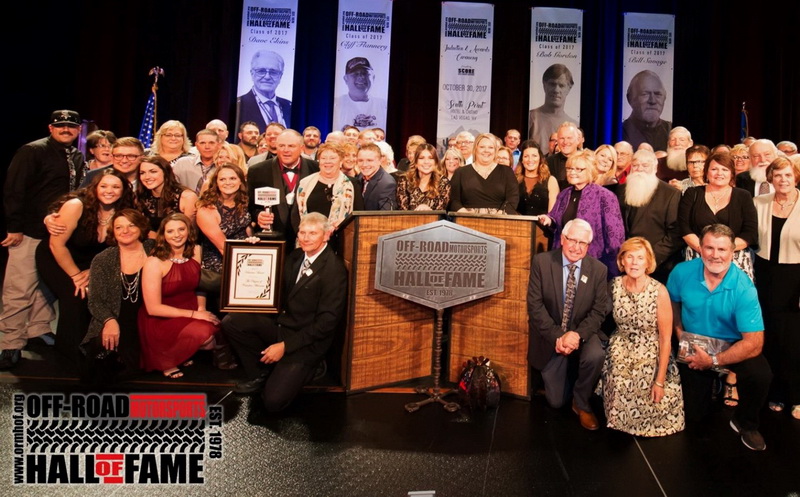 Volunteers are the heart of Crandon Raceway. "Crandon has a population of around 1,700, and about half of them volunteer through thirteen or fourteen organizations," Cliff Flannery said. "We're able to reach out and donate and give back to the people who help make us what we are for 53 years."

The Off-Road Motorsports Hall of Fame recognized the Citizens of Crandon, Wisconsin, with the Hall of Fame volunteer award in 2017. 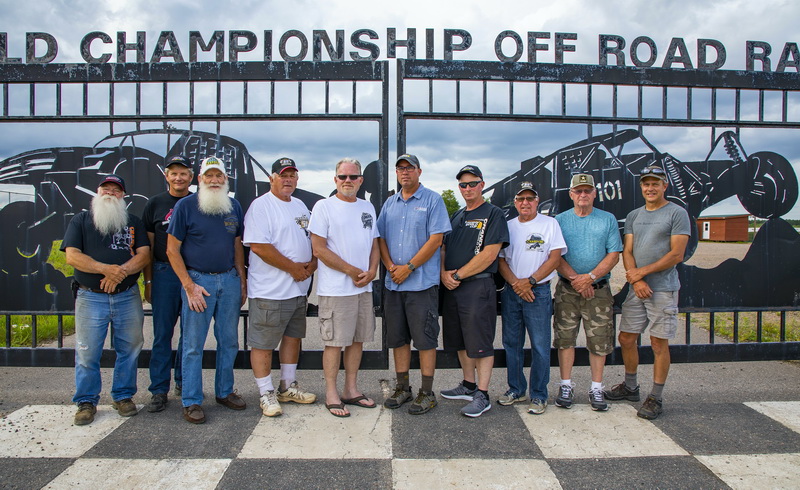 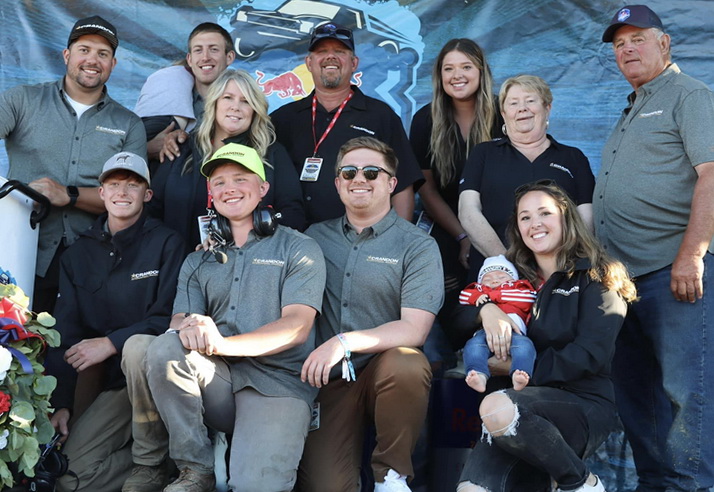 Crandon International Raceway is now owned by Crandon Motorsports LLC with Off-Road Motorsports Hall of Fame inductee Cliff Flannery and his son Jason sharing much of the responsibility for track operations, along with many members of the original group of workers and volunteers who have contributed to Crandon's success over five decades. Multiple generations of the Flannery family along with a dedicated staff and volunteers will ensure that the legacy of Crandon International Raceway will continue.

"We all know what family is. Family is everything. Our family, our racing history, my dad's history building this track, the people in this community...the community we have here, we are one big family. We have 350 volunteers here over the weekend...those families, those people, have made Crandon Raceway what it is today." -- Jason Flannery

Get Crandon updates and other Hall of Fame news delivered direct to your inbox, use the sign-up link below.