ORMHOF Welcomes the Class of 2021

August 1, 2021 - Reno, Nevada - The Off-Road Motorsports Hall of Fame (ORMHOF) received more than forty nomination packets to be considered for the Class of 2021. A committee of off-road industry professionals was convened to evaluate and review the submissions. At the end of a day-long discussion and review, a vote was taken by secret ballot, and the nominees who received votes from a minimum of two-thirds of the committee members were submitted to the Off-Road Motorsports Hall of Fame board of directors for ratification.

The Off-Road Motorsports Hall of Fame is proud to announce the Class of 2021: Steve Kelley, Spencer Low, John Marking, and Tim Morton.

The Class of 2021 will be celebrated at the 2021 ORMHOF Induction & Awards Gala along with the Class of 2020, which includes Bob Bower, Dean Bulloch, Danny Foddrill, Jack Johnson, Roger Mears, Cal Wells, and Tom White, bringing the total number of inductees in the Hall of Fame to 110. Off-Road Motorsports Hall of Fame inductees represent excellence and achievement in many areas of off-road, including advocacy, journalism, industry, rock sports, desert racing, short course, and rally. 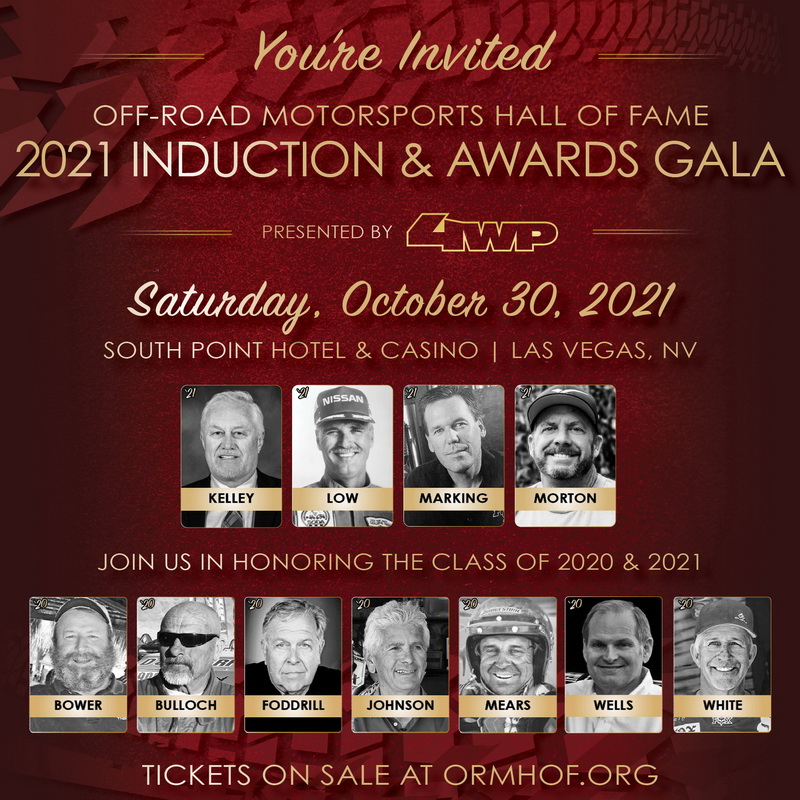 “Off-Road’s Biggest Night of the Year is going to be even bigger this year,” said ORMHOF chairman Mark McMillin. “We’ve got two great classes to induct and it’s going to be quite a party.”

The ORMHOF Induction & Awards Gala draws a who’s who of the sport of off-road, past and present. The event will be held at ORMHOF inductee Michael Gaughan’s South Point Hotel Casino & Spa in Las Vegas on October 30, 2021, the Saturday before The SEMA Show. The South Point is offering a discounted room rate for ORMHOF attendees, and tickets to the Gala are now on sale. Event sponsorships are also available. Details are on the Hall of Fame website.

Meet the Off-Road Motorsports Hall of Fame Class of 2021: 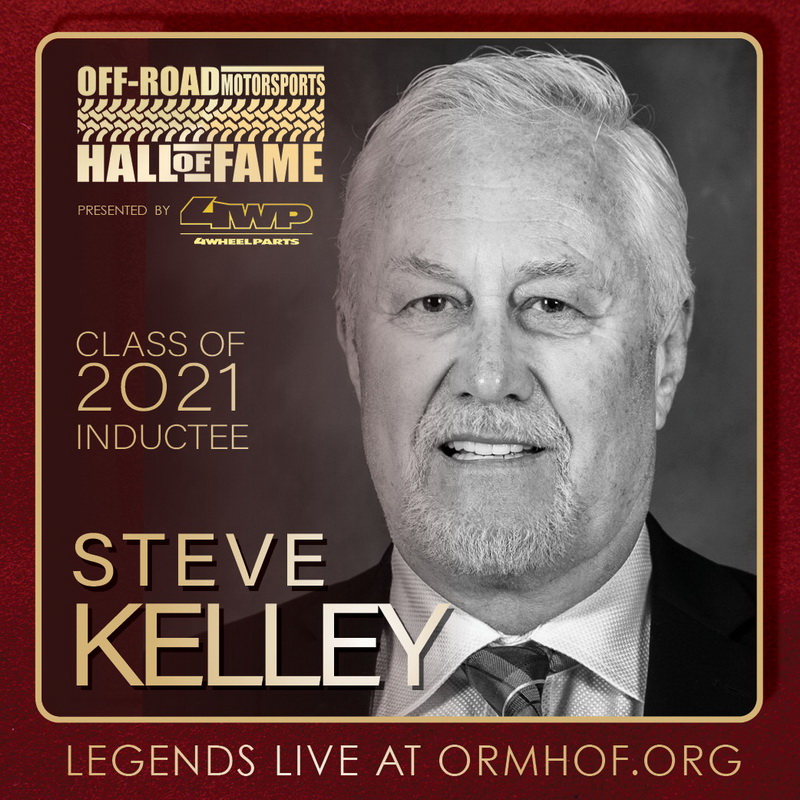 Steve Kelley attended the 1969 Baja 1000 with a friend. They drove to Ensenada and followed the race in a VW bug. The VW made it 300 miles south of Ensenada before breaking the front suspension. Kelley and his friend fixed the VW and drove home, and from that adventure, Steve was hooked. From that moment on, he wanted to race off-road, and race he did. His first car was a FUNCO 2-seater that he raced in the 1972 Mint 400. He went on to compete in nearly every class, winning multiple championships and representing some of the top teams and manufacturers in the sport over a career spanning four decades. ORMHOF inductee Sal Fish credits Steve Kelley with being one of the racers who helped establish the rules during the early days of SCORE. “Steve is one of a handful of people who believed in what we were trying to do and was always ready to help in any way he could.” 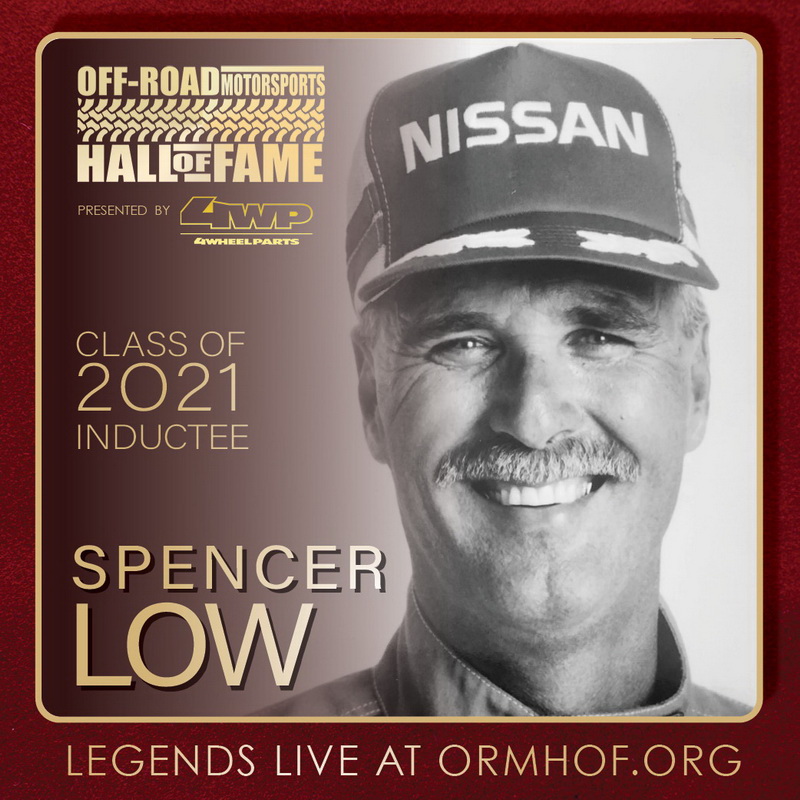 Spencer Low is a Hall of Fame Legacy inductee. He launched his off-road racing career in 1966 at the age of 18 on a BSA motorcycle. He is perhaps best known as a pioneer in the mini-truck movement of the 1970s, with his development and sales of the first bolt-on 4WD conversion kits for mini-trucks through his company, Low Manufacturing. The company was awarded SEMA’s “Best Engineered New Product” in 1982 for Spencer’s innovative Modular Aluminum Differentials, the basis of the 4WD Conversion. Spencer was also a successful racer, with many Class 7 wins during the 1980s, highlighted by a twenty year career as a Nissan factory driver. He was the back-to-back recipient of the SCORE/HDRA Toyota True Grit Award in 1985 and 1986. Spencer was a founding member of the Tread Lightly movement, never missing an opportunity to give back to the sport of off-road. Spencer Low passed away in 2019. 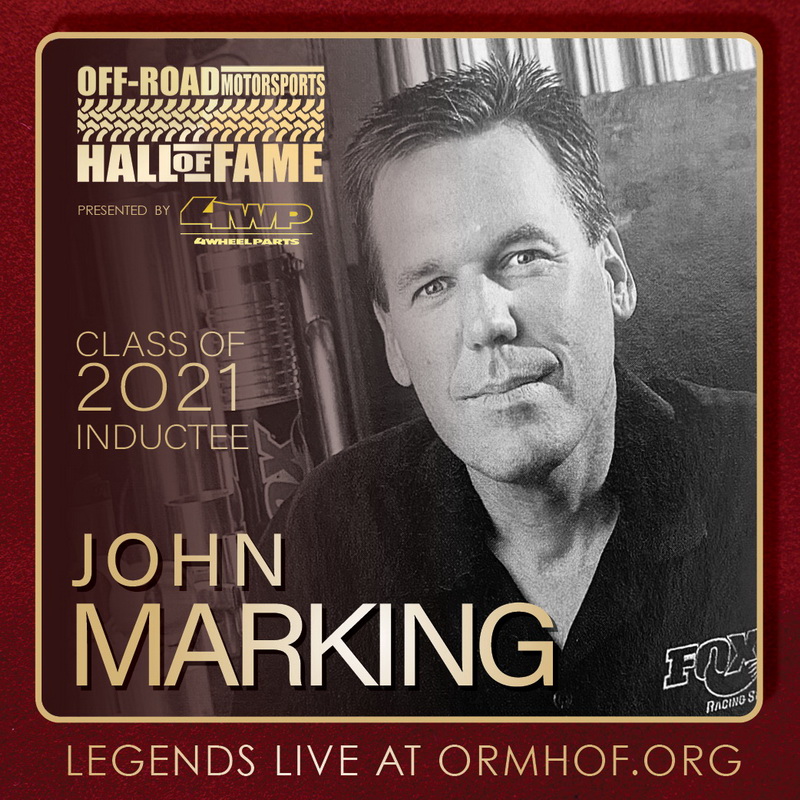 John Marking joins the Off-Road Motorsports Hall of Fame with a racing background, but he is perhaps best known for his work in the field of shock absorber development and technology. Bolstered by his love of desert racing, John went to work at Jimco Racing Products in 1988, the same year he enrolled in the Engineering program at San Diego State University. As a side business, John started rebuilding and modifying shock absorbers. In 1992 John began his career at Fox Racing Shox, and for the next 28 years, he played a significant role in the engineering, design, and manufacturing, of off-road shock absorbers. In 2001, John redesigned the internal bypass shock for larger vehicles, leading the way for major manufacturers like Ford, Toyota, Jeep, Can-Am, and Polaris to introduce high performance off-road worthy vehicles to a new generation of enthusiasts. John holds more than 40 patents in the US and Europe relating to shock technology and design, and has been named to the San Diego Business Journal’s “Book of Influential Business Leaders”. 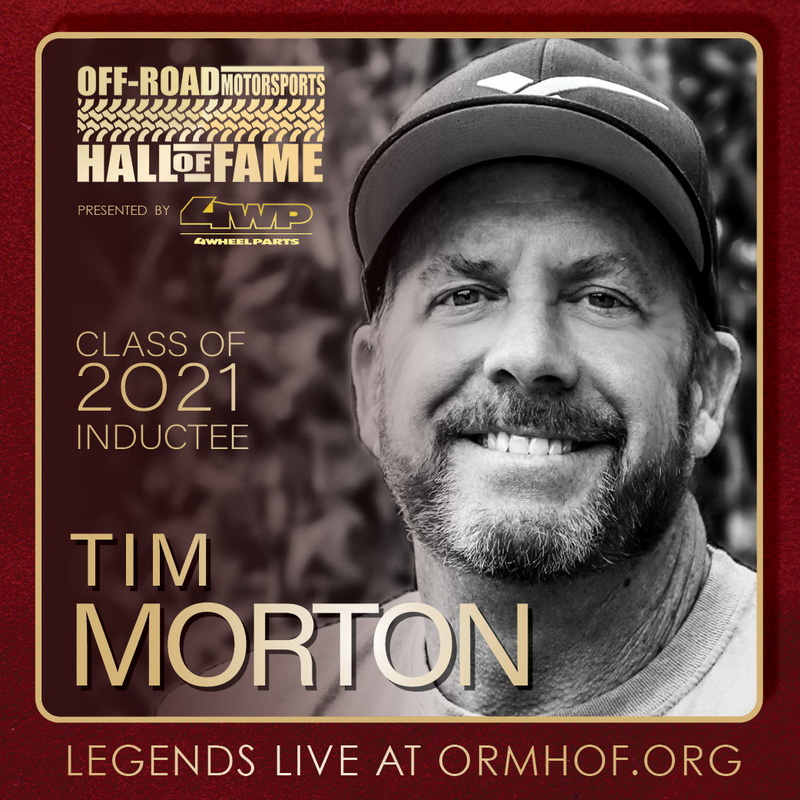 Tim Morton’s journey to the Hall of Fame began in 1983 at the Baja 1000. He was just sixteen years old. His accomplishments include seven Baja 1000 wins, seven Baja 500 wins, and five San Felipe 250 wins. Tim earned four SCORE motorcycle points championships in his career and a SCORE Overall Pro Motorcycle points championship. Tim’s racing success and attention to detail evolved into mentoring and coaching other Baja racers and helping them achieve their dreams. His ‘arrive and ride’ program for Baja racing has spanned more than twenty years. Tim and his wife Jennifer have mentored over sixty race teams and Ironman racers, with a 100% finish rate, for their fully supported racers through their company, Baja Bound Adventures. Tim says, “I get to share their stories and help them make memories for a lifetime, and that’s a pretty great feeling.” A quiet philanthropist, Tim gives back to the people of Baja in meaningful ways. He leaves bags of dog food on doorsteps when no one is home and work boots on front porches because he sees a need and wants to fill it in some way. Seeing yet another need to be filled, Tim and Jennifer recently coordinated a program to collect and donate used driving/fire suits to Mag 7 and Baja Pits volunteers to help keep them safer during refueling pit stops.

About the Off-Road Motorsports Hall of Fame:

The Off-Road Motorsports Hall of Fame was established in 1978 by racing promoter and NORRA founder Ed Pearlman to recognize and honor those individuals and organizations whose lifelong contributions to off-road motorsports have set a standard for others to follow. In 1995, legendary off-road racer Rod Hall became ORMHOF chairman, a position he held for more than twenty years, before selecting current chairman Mark McMillin as his successor.

Building on the organization’s current programs and projects, the Off-Road Motorsports Hall of Fame is launching a Heritage Series to document the early history of the sport of off-road, with the goal to educate and inspire present and future generations.

For more information on the Hall of Fame, and how to join, partner, or donate, please visit www.ormhof.org.